Six Publications that tell the stories and possibilities of SRI

SRI is a set of sustainable rice farming technologies that can help small farmers to significantly increase their rice yields. It is a low-input technology, which can be flexibly applied based on the local factors and farm conditions.

SRI methodology is based on four main principles that interact with each other:

Based on these principles, farmers can adapt recommended SRI practices to respond to their agroecological and socioeconomic conditions. Adaptations are often done to accommodate changing weather patterns, soil conditions, labor availability, water control, access to organic inputs, and the decision whether to practice fully organic agriculture or not. 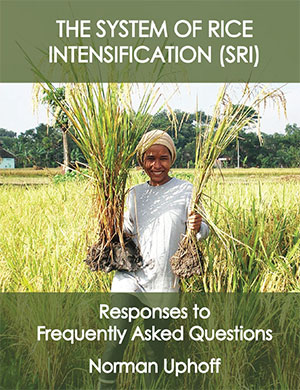 1. From The System of Rice Intensification (SRI), Responses to Frequently Asked Questions, Norman Uphoff  Norman Uphoff has lead the worldwide movement to understand and promote SRI,  a work for which he has won numerous awards. His SRI FAQs is just one of an extraordinary number of publications he has produced.

2. SRI has been successfully adapted to many cultures and 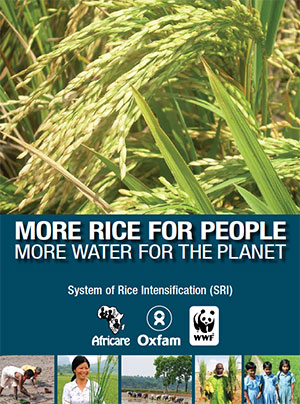 environments. Here is a link to an excellent joint publication which highlights the successes that Oxfam, WWF and AfricaRice have all had with SRI.

3. Here is a link to the worldwide Leisa issue on SRI. This is an excellent introduction to SRI and how it has been adapted to local conditions by farmers, researchers, governmental organizations and NGOs.

4. Here is the SRI-Rice website at Cornell which is the most comprehensive resource in the world. There are academic articles, reports on conferences as well as how SRI has appeared in both the popular and business press worldwide. The site is media rich and it is possible to search for resources by country as well as language.  Monthly updates are provided in several forms.

5. This Handbook for the Peace Corps was done to provide an Introduction to SRI for West Africans.  It was part of a very successful, multi-year project that expanded SRI in 13 West African countries using groups familiar with SRI as the trainers or “Champions”.  It is an excellent example of how training materials have been used to successfully adapt SRI for countries around the middle of our planet. 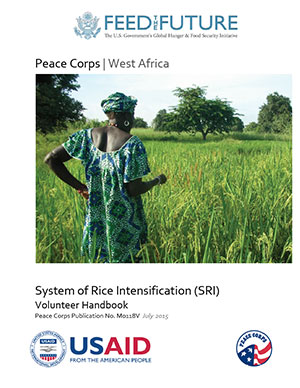 6. Here is a link to a major West African SRI project. SRI-RICE at Cornell was a major consultant on the SRI-WAAPP project, which will hopefully have a second phase/expansion. Thanks to Devon Jenkins, returned Peace Corps volunteer, and and Erica Styger for their work on this publication.

Equipment for small scale farmers that can be built at the village level, for less than 50 USD, by metal workers and blacksmiths is a critical element of the successful adoption and spread of  SRI.  Here is an example of a weeder, called the “Mandava” Weeder that has been successfully used in many countries in flooded rice fields.  Earth Links produced these CAD drawings as part of our work to make these well tested designs available worldwide without cost. Earth Links also contributed some of these early weeder plans to the West Africa project above as well as to Latin American demonstration projects with IICA..

The NGO (SRI Global Inc) which Earth Link helped start, in turn helped to start the NGO, 3ASahel, that was a Champion promoter for Mali.  The first phase of the WAAPP project has successfully ended. 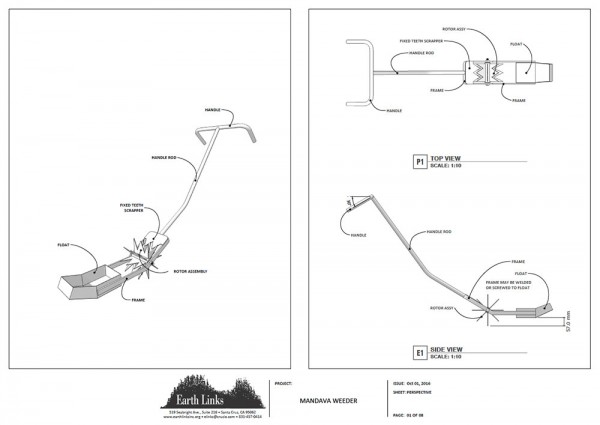 SRI has many benefits such as climate change adaptation and mitigation which is described in the publications above.  An emerging issue and critical health problem is the high levels of Arsenic in some rice. The real reduction in arsenic that appears to be produced by SRI growing techniques (from significant reductions in water use) is an area of research that needs to be done and shared worldwide. Here is a link to the study that should have published results soon.