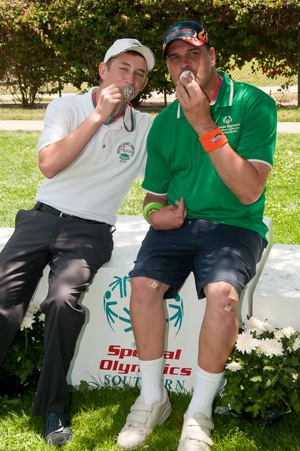 In 2008 and 2009, thanks to a generous donation from Gifts In Kind and The Gap, Earth Links was able to distribute nearly $60,000 worth of portable two-way Motorola radios to Special Olympics groups throughout the western United States for use in their events. Organizers of games regularly had to rent these radios, which were very expensive. The most difficult thing about the donation for us, though, was convincing one of the groups that there were no strings attached, that this was indeed a donation, free and clear. Once they were convinced, however, they put us in touch with other groups, who were in turn very happy to get the call from Earth Links.

The Special Olympics groups to which we donated radios included: Special Olympics of Southern California (Long Beach, Culver City), of Northern California (Silicon Valley), of Washington State, of Idaho, of Nevada, of New Mexico, of Oregon, and Special Olympics of Utah. Other groups, such as Second Harvest Food Bank of Santa Cruz County, North Shore Land Trust (in Hawaii), Jacob’s Heart (Children’s Cancer Support Services in Santa Cruz), and Goodwill Industries of Santa Cruz, were able to use the radios in their operations. Thanks to Kelly Pond of Long Beach SOSC for the photograph.