SRI as a network is growing faster in Latin America in 2014! This agro-ecological method for growing rice (the System of Rice Intensification), known in Spanish as SICA (la Sistema Intensivo de Cultivo Arrocero), has increased the food security of people all over the world, most recently in Latin American countries. Since the First International Latin American Workshop on SRI held in Costa Rica back in November 2011, more and more farmers and researchers are discovering the benefits of SRI. This is a critical movement, as Latin America currently produces only 50% of the rice they consume, and could surely benefit from the increased yields with fewer inputs that SRI provides. (You can read more about SRI here.) 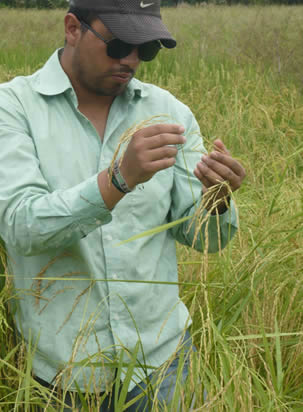 Passionate SRI advocate, researcher and writer Jorge Orlando Acosta Buitrago is the Latin America outreach coordinator for SRI Global Inc and Cornell”s SRI-Rice Center. Jorge is  a recent graduate of Centro Agronómico Tropical de Investigación y Enseñanza (CATIE) in Turrialba, Costa Rica. Jorge’s article, “El SICA orgánico en Colombia,” which was published in the magazine LEISA revista de agroecología, gives a timely and incisive look at the state of SRI in a country especially ready for large-scale adoption of SRI (you can read it here in Spanish). He is translating key SRI documents into Spanish and developing social media for Latin America.

Earth Links was helping to facilitate Jorge’s work and travel around Latin America. Thanks to an initial donation to Earth Links from Three Americas Inc., Jorge’s position was  funded for 2013. Now through a collaboration with SRI Global, Earth Links, Three Americas and generous matching funding from Bridging Peace Jorge has begun a full time initiative to bring SRI/SICA to Latin America.  Thanks to support  and office space provided by IICA Jorge will be able to spread information through their 35 offices throughout the Americas.