SRI Global just received a progress report on a rice project in Mali they funded. Working with the Malian nonprofit group 3A-Sahel, volunteer farmers were able to establish test plots for SRI rice in seven villages, which is helping these villages to ensure their food security in a region lately beset by violence. Earth Links made a contribution to this critical project and is excited to see the transformations taking place. The following has been translated from the original French and edited for length.

3A-Sahel is a new non-profit association, formed to serve farmers in the Douentza area in response to the reduction or absence of services following the recent takeover by rebel forces in the north of Mali. Although primarily agricultural, the area suffers from chronic food insecurity. The Djaptodji commune, located on the edge of the interior delta of the Niger River, has a population of 27,688 in 64 villages, and is characterized by several lakes that flood the area during the rainy season. The Dangol Boré commune, further south, has a population of 21,619 in 37 villages, and is watered by seasonal rains that feed a number of large, shallow ponds. Rice is an important crop in the two communes, but yields are very low. 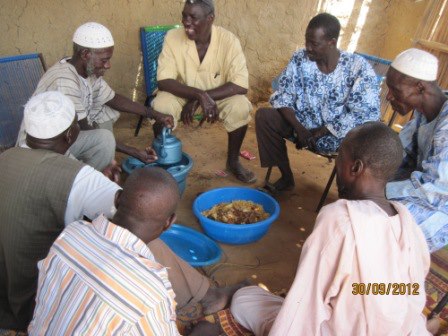 The project’s primary objectives are to introduce SRI to improve rice productivity in these areas, and to have SRI adopted by farmers at all seven sites. Volunteer farmers in seven villages (four in Djaptodi commune, and three in Dangol Bore commune) are taking part in the test. Each farmer is responsible for a test plot of ten square meters. Various varieties of rice have been planted, according to availability.To date, plants at the test sites are developing normally, although Dangol Bore suffered from unexpectedly heavy rains at one point, which slowed plant growth for a period. Farmers have been trained in irrigation alternate wetting and drying, although again, the heavy rains in Dangol Bore did make it difficult to dry the plots as recommended.