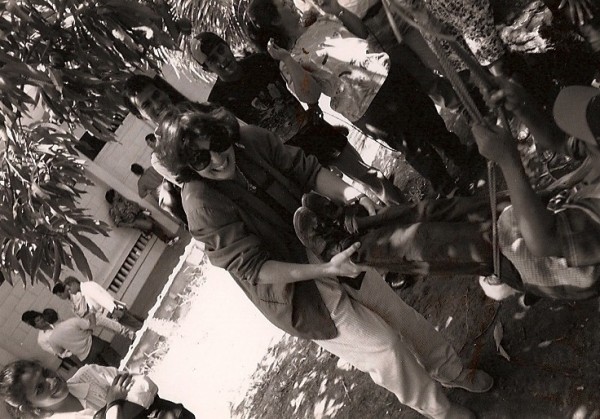 Earth Links has had a particular interest in supporting special education in Nicaragua, in bringing therapeutic expertise to a country whose most vulnerable citizens are especially so, given the pressures on the nation and its peoples from wars, natural disasters, and globalism. To that end, we held a national training in Managua in October 1993 (described in this post) for working occupational and physical therapists, teachers, and other professionals on sensory integration.

The training was so successful that we initiated contact with the occupational therapy program at the National Autonomous University of Nicaragua (Universidad Nacional Autónoma de Nicaragua, UNAN) in southern Managua in order to expand the training. This was, at the time, the only training program for occupational therapy in Nicaragua and had been chronically short on resources (the OT program has since been closed, and now the university hosts the only physical therapy training program in Nicaragua).

In late spring 1995, Earth Links presented a special three day course for the approximately 30 university students in the program, as well as a handful of US students, from Arapahoe Community College in Colorado. Erna Blanche, a US-based therapist originally from Chile, led the course, with assistance from therapists Lois Hickman and Wanda Rosario, who are both based in Colorado. The inclusion of US students and help from Three Americas and the Santa Cruz Sister Cities Project in transporting wheelchairs donated by the Monterey County school system made the trip especially effective.

The training included hands-on presentations with local parents, who brought in their children for assessment and treatment. Students were very enthusiastic and appreciated the state-of-the-art treatment methods. The US therapists were also given a tour of a pediatric facility in Managua so that they could see the therapeutic approaches Nicaraguan physical and occupational therapists were using to rehabilitate patients, which resulted in discussions and demonstrations of moving away from a focus on range-of-motion and other specific physical skills and toward purposeful activities and daily living skills.

Overall the course was very successful and served a number of real needs in several areas of the country, as the students would go on to work as therapists throughout Nicaragua.