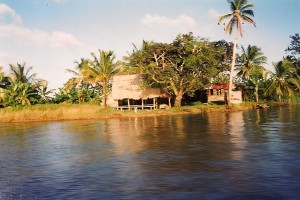 In the late 1990s as support for the FTAA (Free Trade Area of the Americas) was increasing, communities along the Caribbean coast of Nicaragua found themselves vulnerable to economic and legal challenges to their traditional land rights and outright physical violence. Monkey Point, one of the Rama Nation’s Creole settlements south of Bluefields, is very isolated, without roads or telephones, making protection of the community very difficult. So when community members experienced attacks by gunmen attempting to force them off their lands (which would thereby allow large-scale development to take place), something had to be done.

In 2000, Earth Links, Three Americas, and Paul Baker of the Nicaragua Network responded by providing the community a ham radio to reach the regional police and army units. Earth Links also provided them with portable VHF radios with solar chargers, which allowed communication with government and fishing boats in the area.

The presence of the radios and the corresponding possibility of police response to attacks, helped reduce the violence and ratchet back the ferocity of the attacks.