The founders of Project WOO, Nick Mucha and Adam Monaghan met as Peace Corps volunteers in Honduras, Central America. They are also surfers. While still in the Peace Corps they traveled to southern Nicaragua to visit friends who owned a surf camp.  At that time the small southern costal communities in Nicaragua were known to only a small group of surfers. Today these towns are frequently visited by surfers from around the world.

Nick and Adam believed that surf travel should benefit the places it visits. They noticed the negative impact the surfers were having on the communities and its environment. Nick and Adam were surprised that their fellow surfers were not interested in helping address the impact they were causing and resolved to bring their experience and vision to Gigante and other costal communities that were being exposed to surfing and surf culture.  They were determined to show the world that surfers can be catalysts for positive and lasting change in these remote regions. Nick and Adam knew they not only had the passion, but they also had the understanding and skills necessary to change this situation. The duo officially set out to make their vision a reality when they left the Peace Corps in 2006.

Drawing upon their experience as community organizers they created Project Wave of Optimism – the first organization of its kind. Today Project WOO is an incorporated 501(c)(3) nonprofit organization headquartered in California with a field office in Nicaragua.

The Gigante Bus Project is just one example of a successful project involving broad based community participation that Nick and Adam helped start. The town of Gigante now has its own bus. This need was identified by a survey asking all the families in the town what they most needed.  The bus fills an important need by connecting Gigante with Tola its closest neighboring town. Gigante’s teenagers used to hitchhike or walk to their high school in Tola which is about 7 miles away along rutted and muddy roads. The bus has also given the beach community access to vital services in the larger town of Tola, such as health care and accesses to trade. 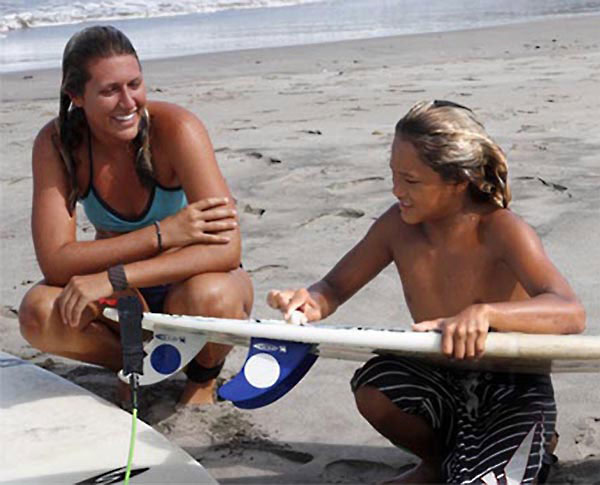 Earth Links has a long history of supporting Wave of Optimism Project .  On this trip we were pleased to donate a notebook computer for the office of and photos of the bus project.