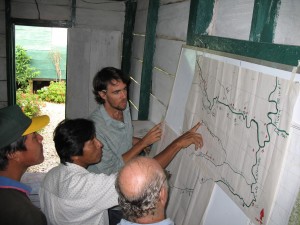 In 1999, Earth Links began working with Jerry Riverstone to help the Rama Indians and Kriols of Nicaragua’s Caribbean coast document their ancestral land claims. A significant portion of our aid was the donation of technology (including ham and VHF radios, and GPS units and software) and technology training, in the hopes of aiding the Rama in protecting themselves from both physical and economic violence. This included providing Jerry with the tools he needed to work with the Rama and Kriol communities in a participatory mapping project. In 2002 and 2003, Jerry took his camera, GPS unit, and mapping software aloft — thanks to the nonprofit aviation organization Lighthawk who provided a small plane — for a first flyover of the territory. In 2006, sponsored by the Rama and Kriol Territorial Government with funding from IBIS Denmark, Jerry went back up to collect georeferenced video footage of Rama lands, which he would later compile with satellite images, GIS data, site visits, and interviews with the Rama and Kriols themselves. 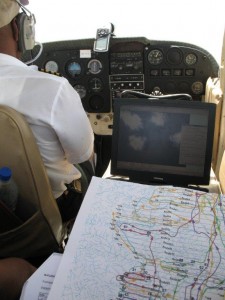 A major breakthrough in the effort to make these maps politically powerful came in January 2003, when the Nicaraguan government approved a new indigenous land demarcation law (Law No. 445). One of the main obstacles to defending native peoples’ land rights in Nicaragua has been the absence of a legal framework to demarcate and title community lands. Law No. 445 creates this framework and mandates demarcation and titling of all indigenous and Afro-descendant lands.

Jerry was in Nicaragua when the new law was signed, and was invited to make presentations for local and regional government leaders in Bluefields. He gave presentations at one of the regional universities (BICU) and at the Municipal Government building in Bluefields, explaining the historical basis and current status of Rama and Kriol land claims. The presentations were attended by leaders of the local regional government, in addition to native community leaders, university staff and students, the National Police, and staff from a variety of non-governmental organizations. According to Rama and Kriol leaders, the presentations were an invaluable effort toward legitimizing their land claims in the eyes of local and regional decision-makers. 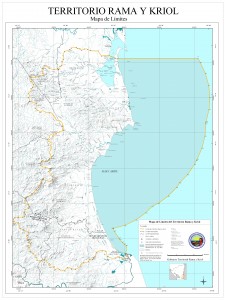 Boundaries of Rama and Kriol Territories, 2006

With the help of the Swedish Development Agency in Managua, Jerry’s book about Rama and Kriol lands, Living in the Land of our Ancestors: Rama Indian and Creole Territory in Caribbean Nicaragua, was published in 2004. It is available for sale at NicaNet.org.

Mapping efforts continued through 2007, as the Rama and Kriol communities in these territories continued to work with Jerry and other geographers and NGOs to document their settlements and defend against incursions and violence. Multi-community assemblies, like the one pictured below, were vital to the documentation effort, especially insofar as members of Rama and Kriol communities could negotiate the unification of their interests under one land claim. 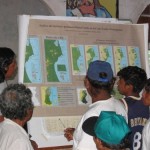 They all had reason to celebrate in 2009: the Commission created by Law 445 (La Comisión Nacional de Demarcación y Titulación, or CONADETI) entrusted the title to 406,849 hectares of land (equivalent to about 1,500 square miles – a little larger than the state of Rhode Island) to the South Atlantic Autonomous Region (RAAS) Rama and Kriol territorial government (Gobierno Territorial Rama y Kriol, or GTR-K), which includes six indigenous and three Kriol communities. As reported in the Nicaraguan newspaper La Prensa, the vice president of CONADETI, Maria Lourdes Aguilar Gibbs, praised the Rama and Kriols for their initiative and noted how momentous the titling was: “This is more than a handing over of a document, it is giving them their lives and livelihoods.”

The process of demarcation is long, and sometimes more than fractious – in February of this year (2010), the Rama and Kriol territorial government (GTR-K) denounced both the death threats and attacks from Spanish-speaking settlers within the newly entitled territory. But the people of the Rama Nation continue to work through these difficulties – see their website RamaWeb for more information and news.