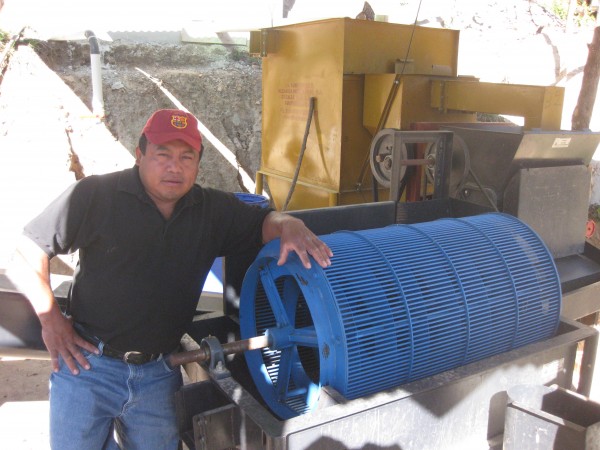 Nazario Huz, Coordinator of the co-op, at the co-op’s new coffee processing plant

The Flor Sanmartineca Coffee Cooperative, in San Martín Jilotepeque, is a remarkable group of coffee farmers who produce some of the most delicious coffee in Guatemala. Their cooperative, which promotes the cultivation, processing, and marketing of certified organic fair trade coffee from San Martín, has made a significant difference in the lives of its members, who live and work in an area particularly affected by Guatemala’s civil war. Three Americas and Earth Links were proud to help finance the cooperative: the financial donation helped bridge a critical gap in the economy of the cooperative, giving the co-op the ability to start paying cultivators when they deliver their coffee to the co-op, rather than having to wait for payment from coffee brokers, which can take up to six months for them to receive. With the co-op, not only are farmers able to get much better prices for their coffee, they have been able to convert individually-owned plots to organic, ecologically sustainable, shade-grown crops, and do much of their own processing of the raw coffee berries. 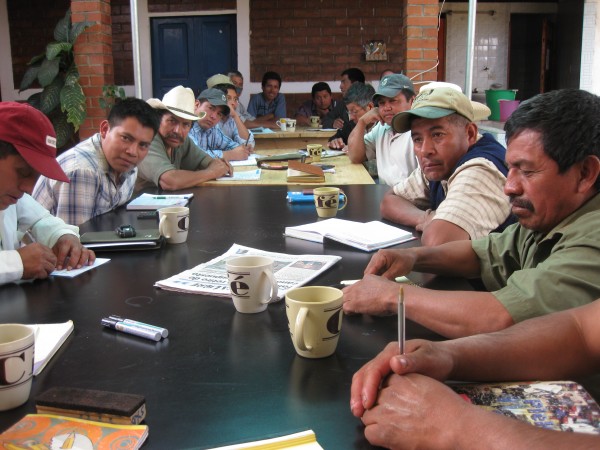 A meeting of the co-op board

San Martín’s coffee is exceptional – processors in Antigua pay more for the coffee from San Martín than for coffee from any other region in Guatemala. The co-op’s work so impressed Anacafé (the Guatemalan National Coffee Association), that the association donated $600,000 worth of materials and machinery to help build the co-op’s coffee processing plant.

Now in its third year, the co-op provides orientation, education, financing, and buys and processes coffee from over 2,000 local producers, an estimated 2 percent of the coffee production of San Martín.