In January 2011, Earth Links was proud to introduce and help with the formation of a new nonprofit organization dedicated to sustainable rice production worldwide, SRI Global, Inc.

For many of us living in North America, rice farming is not the most interesting subject in the world. But a group of researchers based at Cornell University’s International Institute for Food, Agriculture and Development (CIIFAD) find the situation of rice farmers worldwide both urgent and fascinating. They see the causes of the food crises that rice farmers from all over the globe have faced in recent years: from a lack of adequate irrigation water and droughts brought on by global climate change to poverty and international trade politics. And their investigations have led to a simple, low cost, and environmentally sound set of answers to many of these problems, one with a deceptively simple acronym: SRI. 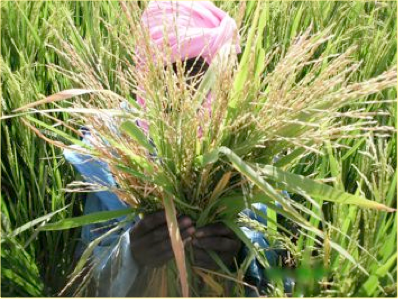 The System of Rice Intensification (known as SRI in English, le Systéme de Riziculture Intensive in French, and la Sistema Intensivo de Cultivo Arrocero [SICA] in Spanish) is a set of methods for increasing the productivity of irrigated rice by changing the management of plants, soil, water, and nutrients. SRI plant management and irrigation techniques encourage rice and other crops to produce more with less. In its simplest form, SRI involves: carefully planting single, young seedlings at a wide spacing; keeping soil moist but well-drained and aerated; and adding compost or other organic material to the soil when possible.

The changes that SRI makes in the growing environment for rice plants induce much larger root systems and more tillering and larger, heavier panicles, as well as changes in the soil biota. These effects reflect changes in gene expression that affect morphological and physiological parameters, such as root branching and delayed senescence. (PDF)

Initially a little more labor intensive than the alternative, these techniques can significantly contribute to human health and economic well-being, enhance soil quality, reduce water use, reduce environmental degradation, and buffer the effects of climate change. 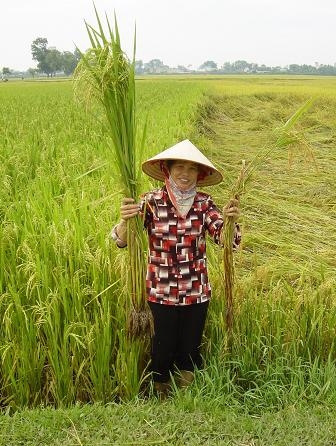 SRI plant and field in an area of Vietnam hit earlier in the season by a severe storm that caused the conventionally-grown rice to fall over but did not affect SRI rice due to its strong root system. 2006 photo courtesy of FAO's vegetable IPM program in Vietnam.

SRI was first developed in Madagascar in the 1980s out of observations by Father Laulanie, S.J., a French priest and agricultural specialist who worked there for more than thirty years. From these beginnings, use of SRI techniques has spread to more than 40 countries, largely through informal practitioner networks and organizations working in agricultural development. Cornell University has played a major role in this growth through CIIFAD.

With the help of Earth Links Executive Director Steve Leinau, in January of 2011, Lucy Fisher, Ed Baxter, Victoria Lines, and others came together to form a nonprofit to promote these techniques: SRI Global, Inc. Earth Links has been supporting their efforts from the beginning, with research, nonprofit consulting, and small seed monies. The nonprofit has been incorporated in the State of New York, and has applied to the IRS for 501(c)(3) status.

SRI Global, Inc. is dedicated to the development and dissemination of SRI informational material in popular media (internet, television, radio, newspapers, magazines, videos, and other channels). It will also focus on attracting new donors and supporters to SRI, linking potential donors directly to vetted SRI projects globally, and receiving and dispersing those funds with low overhead. With the combined expertise of these researchers and practitioners, SRI Global, Inc. is especially interested in creating and participating in cooperative partnerships with existing networks focusing on alleviating poverty and creating sustainable farming practices worldwide.

One such network is in Latin America and the Caribbean. SRI practices have been introduced and validated in a number of Latin American and Caribbean countries (hereafter abbreviated as LAC), among them Cuba, Panama, Costa Rica, Ecuador, Colombia, and Brazil. Unfortunately, those networks of SRI practitioners who support this progress have not grown in recent years due to a lack of resources. LAC countries produce only half the rice they consume, and the yield gap (the amount of yield possible versus what is actually harvested each year) has remained large. Without the resources of SRI practitioners and their access to technical and scientific information, farmers haven’t taken advantage of its benefits, as well as new high-yield strains of rice being made more and more widely available. 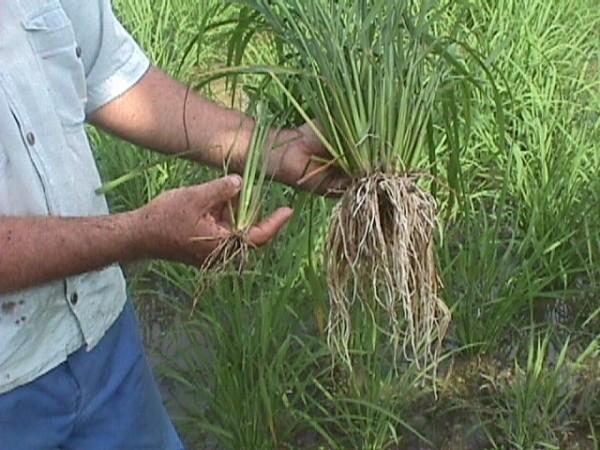 SRI Global proposes to join with CIIFAD, as well as Earth Links and Three Americas (who have worked together in the past on health and environmental issues), to organize this meeting of SRI leaders from Latin American countries in 2011, in order to revive and carry forward SRI work in LAC countries. There is much potential to revive the SRI-LAC Network, to build on SRI experiences in various LAC countries, to motivate newly identified partners in these countries to work on testing and adapting SRI practices to their farming systems and locations, and to reinforce knowledge exchange and learning.