In January and March 1995, a series of heavy storms caused the Pajaro River’s levees to break and flood 2,500 acres of farmland and the small farming community Pajaro, right on the border between Santa Cruz and Monterey counties. These were El Niño storms, which produce higher than average rainfall levels and more frequent storms, and, with the other storms that hit California that winter and spring, is estimated to have caused $2 billion in damages. 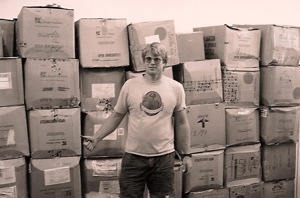 Volunteer Chris McPherson and a wall of boxes of donated clothing

In order to redress the negative effects of the storm, Earth Links solicited donations from individuals and businesses, including a $499,200 donation of clothing from Kmart (via Gifts In Kind Int’l) and $6,000 from the Christopher Hills Foundation to help with distribution costs. The clothing filled an entire 40-foot long trailer. The Second Harvest Food Bank of Santa Cruz and San Benito Counties coordinated a distribution of that clothing to the agencies they serve. Some of the other recipients included Girl Scouts of the Monterey Bay and Pajaro Valley Shelter Services.